Sign Up for Free to View
Isaac Takes On...Omelets 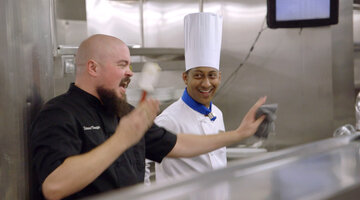 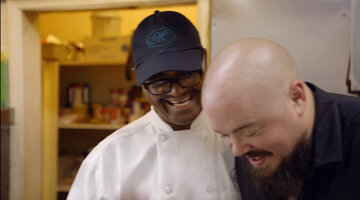 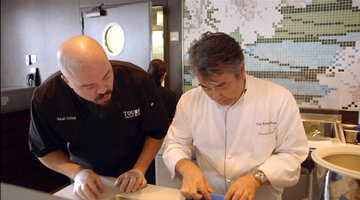 On Season 13 of Top Chef, contestant Isaac Toups proved that he was always up for a challenge. Now Isaac is back and ready to put his culinary skills to the test in our new original video series Isaac Takes On, which launches on BravoTV.com today.

But instead of cooking around California as he did on Top Chef, Isaac will board a Celebrity Cruises ship, where a series of head-to-head challenges awaits. Isaac will face off against talented chefs in the ship's kitchens to see who reigns supreme in serving up next-level omelettes, sushi rolls, and specialty cocktails. He'll also venture onto land, stopping at exotic locations to take on challenges with local chefs, putting his own twist on classic dishes like Puerto Rican mofongo.

Of course, we're pretty confident in Isaac's ability to take on any challenge. The chef and owner of Toups' Meatery in New Orleans wowed the judges in Season 13 of Top Chef with his modern take on Cajun cuisine. Isaac made it to the season finale's location of Las Vegas, but he and Marjorie Meek-Bradley were told to pack their knives and go just before the final elimination challenge. Isaac was later voted that season's Fan Favorite.

Pack Your Knives: Top Chef at Sea Will Set Sail Once Again

Isaac Takes On is just the latest partnership between Top Chef and Celebrity Cruises. Since November 2014, Celebrity has offered the exclusive "Top Chef at Sea" experience on board their ships giving fans and foodies the opportunity to vacation with cheftestants. Interactive Quickfire Challenges and Top Chef-inspired menu evenings can also be found on Celebrity's modern luxury vacations available fleetwide for all departures through June 2017 (excluding Galapagos sailings and sailings four nights or less).

If you're ready to go on this delicious adventure with Isaac, check out the first three episodes of Isaac Takes On. Three new episodes will launch on March 27, followed by three more new episodes premiering on April 3.

See more of Isaac's time on Top Chef, below.

A Top Chef Magic Trick
Life is better as an Insider
Bravo Insider is your VIP pass to never-before-seen content, exclusive giveaways, and so much more!
Sign Up for Free
All Posts About
Isaac Toups
Marjorie Meek-Bradley
Isaac Takes On...
Food
Travel
Related Show