After the big 25-year music celebration that my loving family gave me, we needed the two-week break just to catch our breath and savor the memories. But there comes a time when you have to get back to the "real world," and here we are. Jewel's idea to take the family to Austin on an RV road “bonding trip " was heartfelt. Bless her heart, her intentions were in the right place as she desired to extend the olive branch to Junice and shine more light on the triple "Js" progressive reconciliation. But sometimes the light at the end the tunnel is a train, so here goes the Austin trip:

I am always booked on weekends (Friday/Saturday) for music tours. These are my true "work days." In addition, I volunteer each of my Sunday mornings as Pastor of Destiny Center Church, so these activities prevented me from being able to jump on the RV and make the 16-hour trip with the family to Austin...aw shucks (LOL). As the only Tankard man on the trip, I put Marcus in charge to make sure everything went smoothly.  It turns out that the divas on tour bus Sweet Essence did not get the memo that Marcus (from Full Tank Bus) was in charge, so the sparks of conflict did fly!

Marcus really got angry when he felt like they were disrespecting his wife with the “hormone" comments. I can see both sides, and both sides could have shut down all conflict. First, Sweet Essence could have been a lot more accommodating and kind during the RV rest stop. Even though outdoor conditions are not favorable to high heel shoes, there is no reason to get an attitude or say mean, catty things. On the other hand, Full Tank Bus could have ignored all their actions and let their words fall on deaf ears. My mom used to tell me, “You can only argue with a fool, when you argue with a fool." Marcus was right when he said, “If Dad would have been here, they would not have treated him like they treated us."

Preview
Marcus Has Had Enough 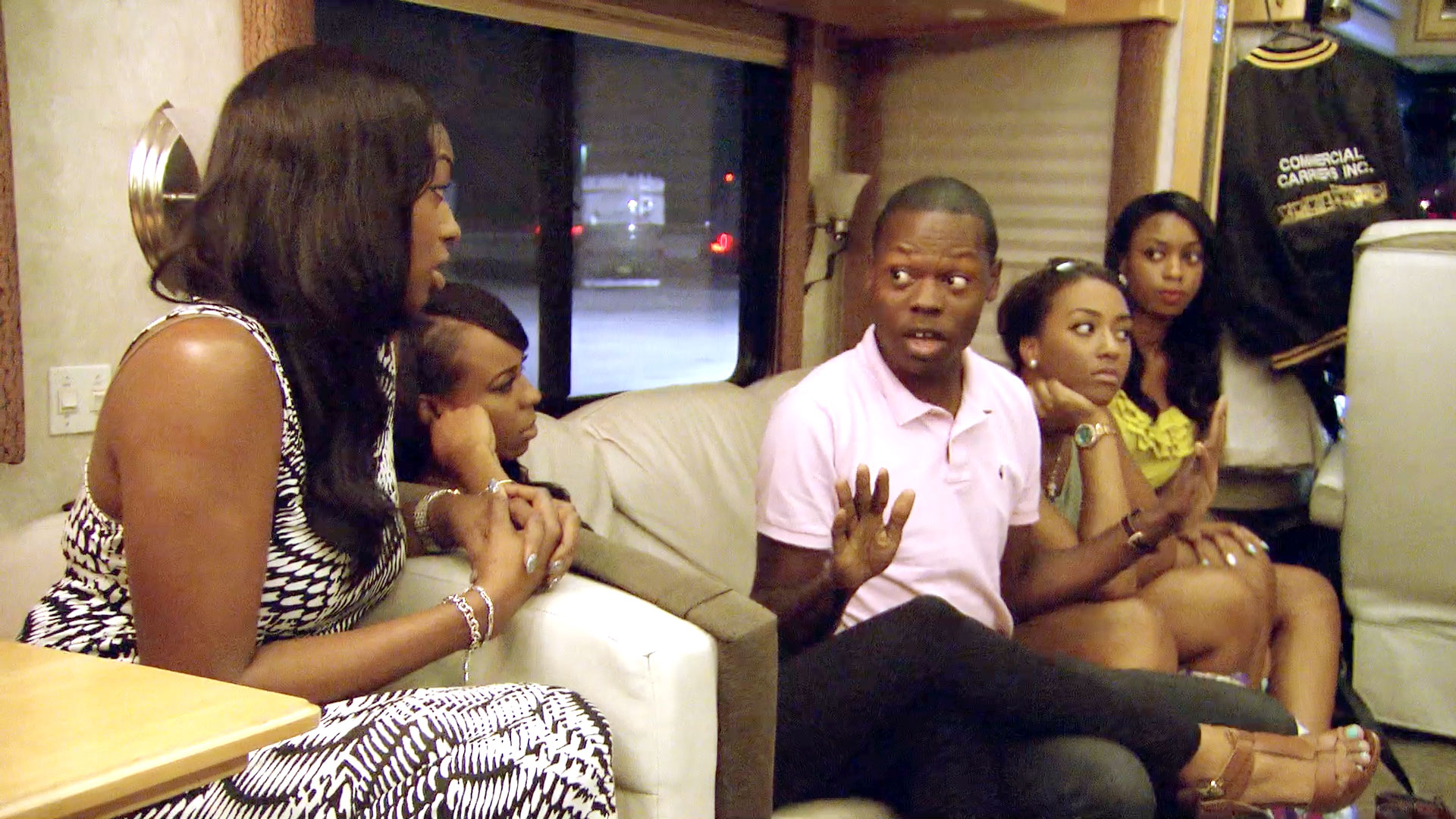 George and his boys and I took the plane over and actually beat the family to Austin (three hours in a plane beats 16 hours on the ground any day). We were glad to be there to greet the family when they finally made it in to Austin. It always feels good to see my family sticking together and bouncing back quickly after arguments. Even though they had a fallout along the way, by the time they made it to Austin, everyone cooled out on BOTH buses!

It is always a pleasure to see Rock and Junice, and I'm glad we came. Hooking up with Rock at the golf spot was fun. Men bond when they can get together and talk about sports, their dreams and plans, and what else...cars!  Well most men, anyway. Rock got a little quiet when I started giving George the love on his new Bentley. I think when a family member is successful enough to be able to afford nice things, then the first place he should be honored and praised is with his family.

Let me get this straight: I don't even like BENTLEY cars. I'm too big to fit in them!  However, I realized it was a monumental purchase for George and Junetta, so therefore I felt like it was important to let them know how proud I was of their accomplishment, as their brother. I'm not sure if Rock and Junice share the same views, so I won't try to speak for them.

I try to give as much love and support to all family members, despite where they are on the income ranks.

The one thing for sure that I noticed is that they are super conservative with the praise and support they GIVE the family (as defined by family), but at the same time, they are dissatisfied with the praise and support they RECEIVE from the family (as defined by themselves). There is a thing called the law of seed time and harvest. It can work for you, and it can also work against you. You want more? You have to give more. I try to give as much love and support to all family members, despite where they are on the income ranks. We all are a work in progress, but we still have value “as-is." The longer I live though, the more I have learned that you can't share your testimonies with everyone. Depending on where they might be, they may take it to be intimidating instead of inspiring. I believe the more time we spend together though, chatting about things we have in common, the better it will be.

The family met for dinner at the Rockmans' favorite restaurant.  It has a good scenic view, but the food tasted like "raw dookie." Every musician I know, from Stevie Wonder to The Rolling Stones, knows that The Salt Lick is the food joint of choice when you come to Austin on tour. I wish we would have gone there. I have been on music tour for 25 years and have been to Austin, TX for Jazzfest and concerts on multiple occasions. I even played on Austin City Limits for National Public TV back in the day, so I have been to Austin at least 30 times. At the dinner table, when Junice asked me if this was my first time to Austin, I intentionally tried to play my Austin experiences so as to not "outshine" them by saying I have been there 10 times. That did not work. She still thought I was boasting or competing by saying 10 times (I'm glad I did not tell the truth and say 30, whew!). Anyway, no worries. Nobody died. My motto is, “Don’t fight battles that don't matter." 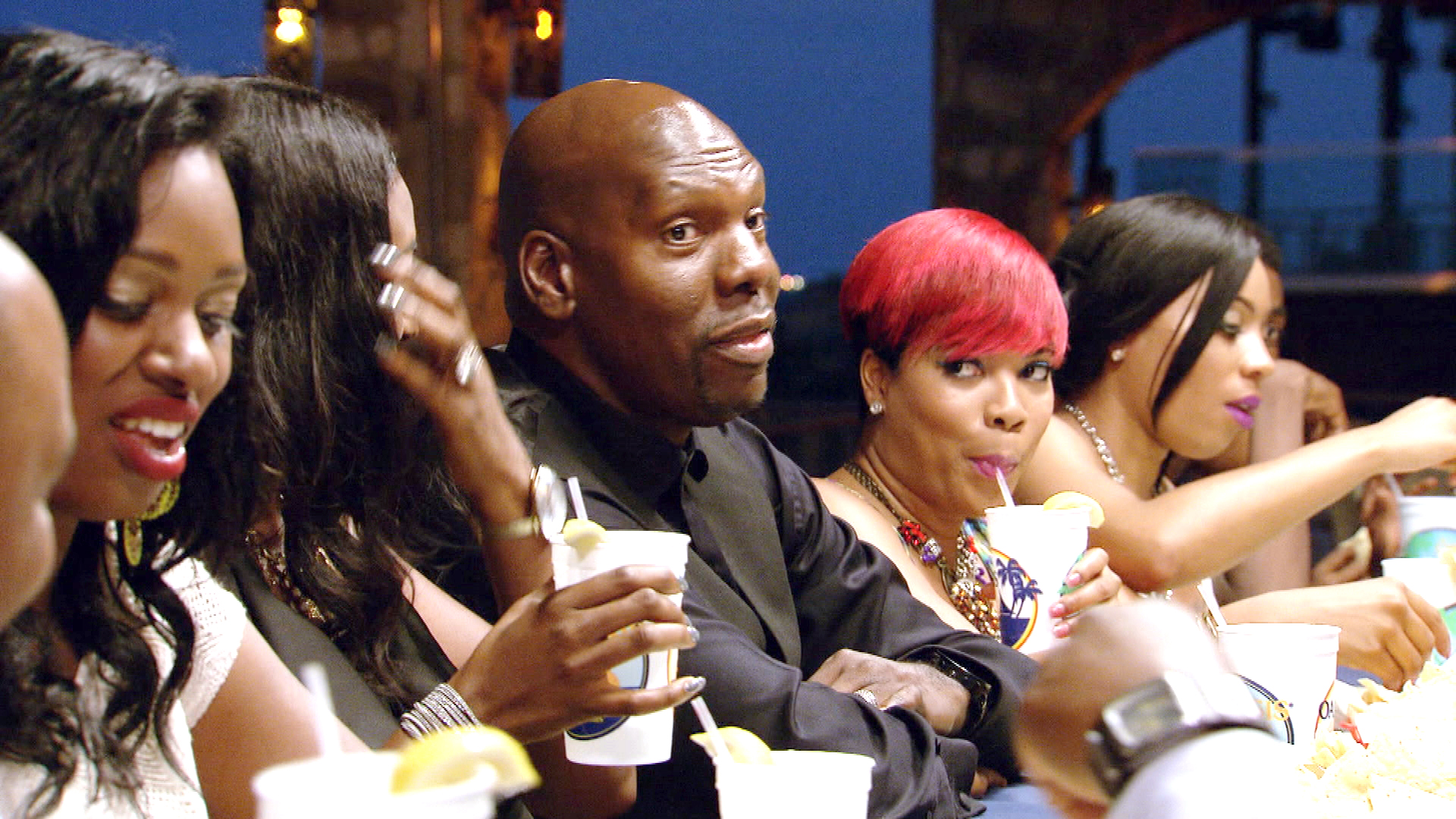 As the dinner progressed, things got heated (as per usual), and according to the Rock, the reason for Junice's anxiety was because the family celebrated Junetta's new Bentley at a much greater level than they celebrated her being accepted into grad school. This was a monumental breakthrough of communication! I get it! That's an easy fix.  All we have to do is shut down the praise to other family members' material blessings and turn up the love to Junice's major accomplishment of being accepted into Grad School. I will pass this revelation on to the family, and we will all go over to Rock and Junice’s house, shower them with love and live happily ever after, right?   #FixItJesus

Tune in next time to see if I'm right.

All Posts About
Ben Tankard
You May Also Like...
Recommended by Zergnet
Latest Posts