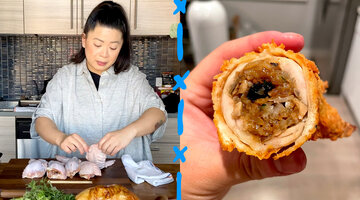 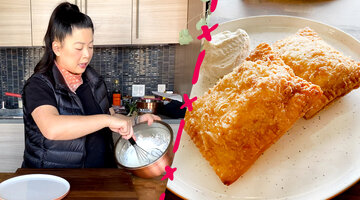 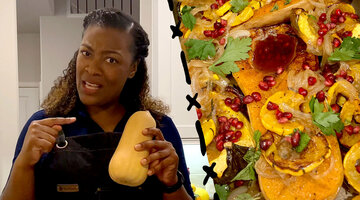 With the holiday season looking different for many people around the country this year, members of the Bravo's Top Chef family are offering their best tips for whipping up a special meal with ease. As Sheldon Simeon noted via email, "cooking a whole spread can be daunting," but with tried-and-true advice from alums Sheldon, Jamie Lynch, Tanya Holland, Carla Hall, Kevin Gillespie, Justin Sutherland, and head judge Tom Colicchio, anyone can make a perfect holiday meal — with ingredients you likely already have at home.

Justin, who competed on Season 16, recommends keeping "basic staples" such as "eggs, potatoes, [and] dry pasta" stocked at home because "when you have good bases, you can jazz stuff like that up."

Expressing similar sentiments, Seasons 14 and 17 contestant Jamie suggested having "high quality olive oil (cold pressed), tons of eggs and 00 flour," explaining, "You gotta make sure you can make that fresh pasta, you know? If you’ve got eggs and flour, you’re good."

In case you weren't convinced already, Tanya also recommends having eggs and flour at home in addition to milk and butter, which, as she explained via email, are "ingredients for popovers."

"So simple," the Season 15 contestant wrote. "And so impressive to offer hot appetizers that [are] cozier in the winter months."

Keeping your house stocked with flavor-adding essentials is crucial for pulling off a holiday (or any) meal, Sheldon and Kevin explained. "Nothing is worse than under-seasoned food," wrote Sheldon, whose forthcoming book, Cook Real Hawai'i, is now available for preorder. "Finish your dishes with a sprinkling of Maldon salt. The rustic salt crystals give you a pop of flavor as you’re enjoying your meal."

"Outside of your basic seasonings like salt and pepper and oil and vinegar, the best things to have are a can/box of chicken broth and some frozen yeast bread dough" wrote Kevin, who competed on Season 6. "Sometimes you can’t make your own and these items are quick and easy."

Get a Head Start on Cooking

Generally speaking, prepping whatever menu items possible before a holiday can relieve much of the day-of stress. "Do most of the cooking ahead of time and just put the finishing touches [on the day of the holiday]," Jamie wrote. "You can spend more time celebrating and less time fussing over the meal!"

"Doing a roast or another braised dish that can be made in advance is a great idea," Tom suggested. "So you’re not last second scrambling to put a meal down on the table."

Additionally, Kevin noted that picking up a few easy items at the grocery-store before a special meal can help accommodate for longer-than-anticipated cooking times later on in the day. "I always have some type of appetizer on hand to set out if the meal is taking longer than expected," he wrote. "Some soft cheeses, charcuterie, [and] pâté are great for this."

Have a free moment in the weeks leading up to a holiday? Make "rolls of homemade slice-and-bake cheese crackers that you can put in the freezer and pull out as needed," Tanya suggested.

"Think about your kitchen’s equipment when putting your menu together," Kevin wrote. "For example, don’t create a menu where all the dishes must go in the oven if you only have one oven! You’ll end up with some overcooked and some cold items. Think about the number of burners, your oven space, the grill, the toaster oven, and decide how you can use each one so that everything is ready at the same time."

For Tanya, a simple addition to classic holiday dishes can go a long way. "I like adding citrus zest to Brussels sprouts, cranberry relish and roasted poultry," she wrote.

While Sheldon declared, "Prime Rib is my go-to holiday dish," the Seasons 10 and 14 contestant also shared that when it comes to holiday meals, "I always like pulling inspiration from other cultures, like rubbing down the turkey in Tunisian Harissa or slathering the Pork Loin in Japanese Taré."

For those who prefer a fish-based holiday meal, "I always cook a version of the Feast of 7 Fishes for Christmas," Tom wrote. "Mine typically stretches out to about 14 different dishes including fritto misto, various crudos, salt cod and cacciucco, which is a Tuscan fish stew."

Tom also recently shared his recipe for Seafood Cioppino, which he puts his own twist on by using a jar of Spicy Sauce from The Jersey Tomato Co, where he is an an equity partner, brand ambassador, and a culinary consultant.

While talking about Thanksgiving meal prep last month, Carla said she was switching up her cooking method this year. "I am doing lamb, which I have already tried in the air fryer. I marinated it, roasted it, put it in the air fryer," she said. "We do a very similar meal for Christmas, but sometimes we’ll switch up the meat and roasted vegetables. I think this year I’ll do small roasted tomatoes and potatoes with lamb and rosemary and lots of garlic."

Outsource Parts of the Meal

"From having sides, to proteins and then desserts, that’s a lot for one to take on," Sheldon wrote. "Beautifully cooked gourmet holiday meal kits made by your favorite restaurants [are] now a thing! Choose to make a dish and then get the rest of the spread from a restaurant. There’s no shame in that. It’s win-win for you and the restaurant."

Want more Top Chef? Catch up on the latest season through the Bravo app.

Brian on the "Battle" Of Owning Restaurants Amid COVID-19

Lorena Garcia on Running 5 Restaurants Amid a Pandemic

Dolores Reacts to Jennifer Saying She Looks Like a “Handbag”