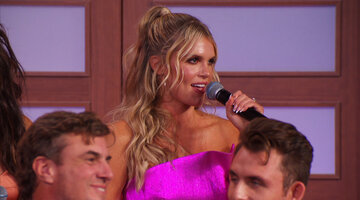 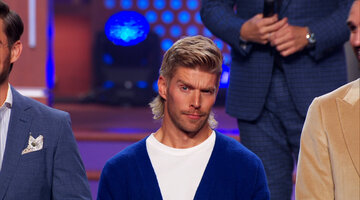 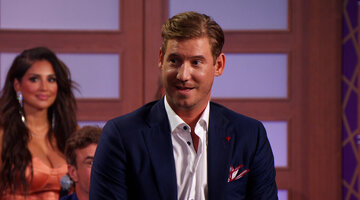 Now Playing
9:33
After Show
Austen Kroll Comes Face to Face with His Exes

Well, you can’t say he didn’t warn you. Andy Cohen predicted that his Watch What Happens Live with Andy Cohen relationship roundup game was going to be “so awkward” — and he certainly wasn’t wrong. During the BravoCon 2022 “Charming House Rules” episode, which aired on Thursday, October 20, Southern Charm“’s Austen Kroll had to take turns in the hot seat with not one but two of his exes: Summer House’s Lindsay Hubbard and Ciara Miller.

The rules were simple: A pair of “former flames” got to review where they “may have gone wrong” in their respective relationships in front of a live audience of Bravoholics.

As Lindsay and Austen first took center stage, Craig Conover joked about how “messy” Andy is, and the host’s first victims certainly agreed. “Andy loves a good mess,” Lindsay joked, before landing the first punch in her matchup: “Should I invite all the other girls up too?”

After the pair admitted they were both drunk the first time they hooked up, Andy asked Austen if he was “guilty of misleading Lindsay,” whether he meant to or not. “Yeah, I can say that I thought that our friendship was just friendship, and maybe we took it too far. I don’t know… Lindsay, I apologize if I ever misled you or led you on.”

In reality, they’d already squashed their beef before BravoCon. Austen noted that they are “in a good place” now, to which Lindsay teased, “You’ll see it on Winter House.”

In the video above, see more of what the Summer House cast member had to say about Madison LeCroy’s claims that she and Austen were “hooking up during the gray area” of their relationship.

Austen wasn’t off the hook just yet, though: Andy immediately called him back to stage to face Ciara. When the WWHL host asked if there was ever a point when he was “also falling for” his Winter House castmate, Austen had nothing but nice things to say.

“I mean, that was the first time that I had really connected and vibed with somebody, so, yes,” he replied. “Winter House would not have been the same without Ciara there. That’s a fact.”

Even given the opportunity to share the “shadiest thing” Ciara had ever done to him, Austen insisted that she “hasn’t really been that shady” to him, if he’s being honest.

Though Ciara didn’t hesitate to call Austen’s behavior “so incoherent and just sloppy” when he was in town for Lindsay's birthday weekend on Summer House, she might have returned the favor later.

When Andy asked how she would “rate the sex on a scale of one to 10,” Ciara ultimately declined, responding, “I don’t want to do that.”

Life is better as an Insider
Bravo Insider is your VIP pass to never-before-seen content, exclusive giveaways, and so much more!
Sign Up for Free
All Posts About
Austen Kroll
Ciara Miller
Lindsay Hubbard
Madison LeCroy
BravoCon 2022
Bravo Relationships
Related

So, What Is Currently Going On Between Austen and Olivia?

Olivia’s Feelings About the Austen and Ciara Situation