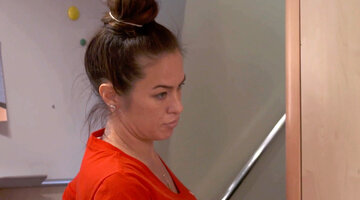 0:49
Preview
Is Jessica More About to Be Fired? 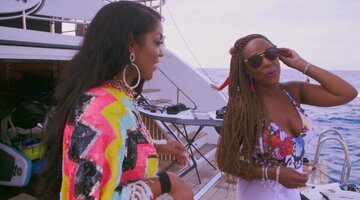 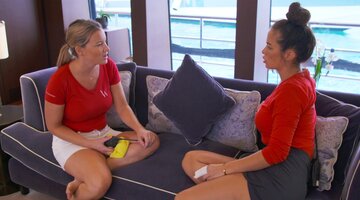 1:22
Preview
Will Jessica More Be Fired Over a “Miscommunication”?

The Wellington said goodbye to another crew member as Hindrigo “Kiko” Lorran exited the charter season in the August 3 episode of Below Deck Mediterranean.

After Kiko delivered a lackluster Las Vegas-themed dinner filled with fried foods for the guests, Captain Sandy Yawn told the chef that this would be his last charter with The Wellington crew. "I felt very bad,” Kiko said of the moment Captain Sandy fired him during an interview with The Daily Dish prior to the episode airing. “That was crazy.”

Things started to go downhill for Kiko following the fourth charter of the season when Captain Sandy expressed disappointment in his organizational skills in the galley, as well as his plating. She told Kiko that he needed to step up his cooking or she was going to have to find a new chef.

Kiko said that he “was feeling great” about his performance up until that point this season of Below Deck Med, but that conversation with Captain Sandy made him “nervous.” Though Kiko explained that he is generally a “very positive” person, getting a critique like that put him in a negative head space. “[When] she said that, I was like, whoa,” Kiko recalled. “Like, I’m giving not 100 percent; I’m giving, like, a thousand percent of myself here.”

Going into that Las Vegas-themed dinner, Kiko said he already felt “so tired,” on top of trying to incorporate Captain Sandy’s feedback about plating. Just figuring out what to serve the guests proved to be a challenge for Kiko, who noted that he had never been to Las Vegas and had no reference for what a dinner inspired by Sin City would look like.

Kiko enlisted the help of Hannah Ferrier to determine what would fit the theme best, and she suggested truffle fries and nachos, in addition to the fried chicken and shrimp cocktail he already had planned. “I’m not putting [this] on Hannah. Totally not putting [this] on Hannah. That was on me,” Kiko told The Daily Dish. “I was listening [to Hannah’s] menu. That wasn’t my menu.”

Kiko agreed with Captain Sandy that the Las Vegas dinner was “horrible.” “I never served that s--t on any boat that I [worked] for,” Kiko said, adding that he felt “bad” for the guests in that moment.

Captain Sandy Yawn Has Another Nacho Disaster on Her Hands

Even though he told Captain Sandy upon his firing that he would finish out the charter, Kiko came close to leaving the boat during breakfast the next morning. However, he ultimately decided to keep his promise to stay until they dropped the guests off. “I ask myself, ‘Am I a quitter?’ I never quit. I never quit. Never quit a job. Never,” he shared. “It’s better I finish because that’s my personality. And that’s why I decided to stay, even though it was hurting me so bad.”

Kiko said he was glad he did finish out the charter because he was able to have one last opportunity to wow the guests with his cooking, which he did, even earning a round of applause following their dinner on their last night on the yacht. “I made the guests happy in the end,” Kiko said. “And it was good. [A] great feeling, actually, because I had that crush that night [before], but after was totally fine. [I] was good. So, I felt great.”

That final dinner showed who Kiko is as a chef, that he is someone who “really works hard and puts all the love” into his food, the chef said. “I think I left with a good impression,” Kiko said. “Food is love for me. It’s not just technique or anything like that… I was proud of myself.”

Kiko said he got emotional after being fired because he wasn’t sure how it would impact his career. Though he was sad to leave The Wellington and not be able to show more of what he had to offer as a chef, Kiko said that he was also happy to get back to his life on land. “Now, everything’s OK. I’m gonna get my board and go surf. Eat good food. Cook for my friends. And I was feeling awesome,” he recalled of how he felt while leaving the boat. “[Here comes the] positive vibe again.”

Looking back on this season of Below Deck Med, Kiko said he wishes he had trusted his instincts more and not second guessed himself after hearing others’ feedback. “I was thinking too much about what people think about me and what people [are] gonna say about me. So, I [thought] too much about that, and I forgot that I just have to be myself and follow my thoughts,” he shared. “You can see in the 72 plates night, I just was following my thoughts… I wasn’t thinking it was that [challenging] because I have everything in control in my mind.”

Though Kiko said he understands Captain Sandy’s decision to let him go, he noted that “nobody’s perfect.” “Everybody messes up once or twice. I don’t think I [got] the chance enough, because I was doing a great job before," he shared. "So, because [of] one mistake, you’re done.”

Kiko said he isn’t sure whether or not he would work with Captain Sandy again, but he does think she is “a great person.” “I don’t have anything against her. I think she has her opinion about me, and I totally respect her as a person and as a captain,” he said. “[It] just didn’t work out.”

After leaving The Wellington, Kiko set out on more adventures, visiting a friend in France, vacationing in South Africa with his girlfriend, Nicole, and spending Christmas and New Year’s back home with his family in Brazil. He then jetted off to the United States where he took a road trip down the coast of California before finally visiting Las Vegas.

Kiko then flew to Hawaii, where he remained for four months because of travel restrictions due to the coronavirus (COVID-19) pandemic. He is now back in the galley, cooking for charters on a catamaran in Martinique in the Caribbean. “It’s been like a dream. It’s been amazing,” Kiko said. “I just say, thank you, god, for everything because everything happened so naturally. Like, I don’t even make plans. Things just come to me. I just have a good faith, and that’s it. Do good stuff means good stuff’s coming back.”

Kiko said he will continue in yachting “for a while” because he has a financial goal and because he just loves the sea. In the future, Kiko and his girlfriend, whom he first met in 2016, hope to open a guest house with a restaurant.

For now, Kiko and Nicole have been enjoying watching Below Deck Med together. “I think she likes it. We watch together,” Kiko said. “In the beginning, she was afraid, like, ‘Don’t flirt with girls.’ I said, ‘No, no, don’t worry,’ but then everything went well.”

He also still keeps in touch with several of his crewmates from Below Deck Med, including Alex Radcliffe, Rob Westergaard, Jess More, and Hannah, with whom we saw Kiko form an especially close bond this season.

It's monday, issssaa🤪🤪! My best friends on Wellington, thanks girls to hold my back when I needed. Tonight on @bravotv at 8/9c #BelowDeckMed #bravotv #friendship

Overall, Kiko said Below Deck Med “was a great experience,” one that helped him discover not only who he is as a chef but also as a person. “Before, I didn’t know exactly what kind of person that I am… I spoke about my whole life [on Below Deck Med], and it felt so great. I cry a lot too, but [crying] was very good for me because I put it out and [figured] out who I am,” Kiko shared. “I don’t have any regrets [about being] part of the show.”

Just feel blessed to live this beautiful life and to get old like a pirate! ⛵😁 📸 @nicole.skwara 😘#thesurfingchef #sailingadventure

As you can see, Kiko hasn’t lost his signature positivity, whether he’s reflecting back on his time on Below Deck Med or looking forward to the future. “I’m in a great position, and I’m doing very well. After the show as well, great things [are happening] in my life,” he said. “[It] was [an] amazing experience, and I even would do it again.”

See more from Kiko's time on The Wellington, below.

Chef Hindrigo "Kiko" Lorran Has to Cook a Dinner of 72 Plates?!
Life is better as an Insider
Bravo Insider is your VIP pass to never-before-seen content, exclusive giveaways, and so much more!
Sign Up for Free
All Posts About
Alex Radcliffe
Hannah Ferrier
Hindrigo "Kiko" Lorran
Jessica More
Robert Westergaard
Sandy Yawn
Below Deck Mediterranean
Exclusive
Food
Related