Sign Up for Free to View
Christine "Bugsy" Drake is Back and Bringing the Thunder! 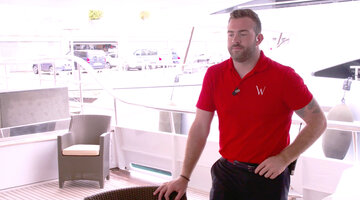 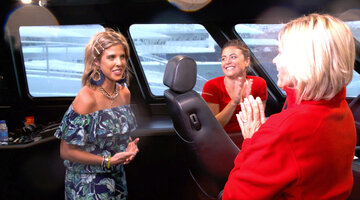 Now Playing
1:25
Preview
Christine "Bugsy" Drake is Back and Bringing the Thunder! 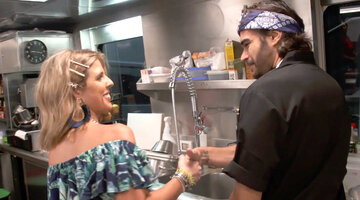 A familiar face returned to Below Deck Mediterranean in the June 22 episode.

The Wellington crew was in need of a new second stew following the departure of Lara Flumiani just before the start of the second charter. Luckily, Captain Sandy Yawn was able to find a replacement, and even better, it was someone who she, Hannah Ferrier, and Malia White had all worked together before: Christine "Bugsy" Drake.

Although Hannah and Malia had very different reactions to the news of Bugsy's return during the episode, the new second stew, who we first met in Season 2 of Below Deck Med, couldn't contain her excitement about joining The Wellington yachties. After Malia re-posted a fan's message welcoming Bugsy back to Below Deck Med in her Instagram Story, Bugsy commented, "So happy to be back with you my girl."

Hannah, who encountered some drama with the second stew in Season 2, is willing to put the past behind her in order to have a successful charter season. "I'm feeling a little bit apprehensive about Bugs. Will I trust her? No. Are we gonna be friends? No," Hannah said in a preview of the next episode of Below Deck Med. "Are we gonna work together? Yes."

We got to sneak a little peek at Bugsy's first moments back on Below Deck Med in the above preview, which shows her stepping foot on the yacht and greeting her new crew members. "Coming back to work as a second definitely is not something I ever saw myself doing, but Captain Sandy's the only person I would do something like this for," Bugsy says in an interview in the clip.

Bugsy also has a warm reunion with Captain Sandy in the video. "I'm so happy you're here," the Below Deck Med boss tells the new second stew. "I need your skill set, I need your support, thank you."

Captain Sandy gave Bugsy an idea of how Hannah was handling the news of her return. "Hannah's happy," Captain Sandy says. "Obviously, I think it was a shock to her, but I think you'll be pleasantly surprised."

Someone who already seems to be a fan of Bugsy is Alex Radcliffe. The deckhand seems to be a bit flustered around Bugsy in the below preview of next week's episode. "Bugsy, she's a very attractive girl," he says in an interview in the clip. "I'm a big eyes and teeth person, so if you have perfect teeth and nice, bright eyes, I'm already in love."

We also learned a little bit more about what we can expect from Bugsy's Below Deck Med return in her bio on BravoTV.com: "This season, she joins the crew in the Second Stew position with fewer responsibilities to juggle. Back on board, Bugsy is looking for redemption while also hoping to find both fun and romance. Best known for her bubbly personality and passion for planning theme parties, Bugsy has no issue speaking her mind when things go awry."

See more of what you can expect from Bugsy's return, below.