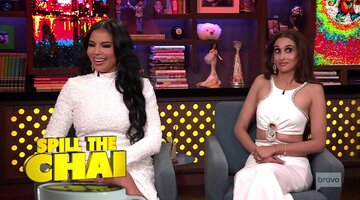 Family Karma’s Anisha Ramakrishna is currently living in newlywed bliss and we’re finally learning a bit more about her mystery husband, who she wed just a couple months ago. When Anisha appeared on Watch What Happens Live with Andy Cohen on January 22, she not only shared some new details about her wedding and new husband but also revealed if any of her friends have met her partner yet.

First off, Anisha’s parents were in the Clubhouse audience for Sunday’s episode, and Anisha confessed that her mom and dad are “obsessed” with her husband. Speaking of her family, she noted that they were the only people in attendance at her wedding.

“I did not [have a traditional wedding]. Do I look traditional?” she said, adding that the guest list was very small. “I just had immediate family — my parents and my siblings, and same for my husband.”

It wouldn't be #FamilyKarma without the family! Anisha Ramakrishna's parents are in the #WWHL audience tonight! pic.twitter.com/yFqzRyElNL

Wedding planning has been a hot topic on Season 3 of Family Karma for some of Anisha’s friends, and she noted that she gets why they are feeling the pressure. “Wedding planning is the worst thing ever,” she said, adding that she planned her own recent nuptials. As for her frozen eggs, she confirmed what’s next for them after she joked she might share them with Amrit [Kapai] and Nicholas: “Those Rolls-Royce eggs are mine.”

Family Karma’s Anisha Ramakrishna Is Engaged (!) and She’s Spilling All About Her Future Husband

Anisha shared another major update on her “private till permanent” philosophy when it comes to introducing her partner to her friends, saying, “No one needs to meet just a random guy, so until we’re married, which I said on camera, you’re not meeting him. And while we were filming, my grandparents hadn’t even met him... We are married. I got married two months ago. Bali [Chainani] has [since met him].”

Speaking of her man being a bit of a mystery, she revealed why he has remained off-camera: “It’s not me not choosing to open up; not everyone wants to be on television.”

Life is better as an Insider
Bravo Insider is your VIP pass to never-before-seen content, exclusive giveaways, and so much more!
Sign Up for Free
All Posts About
Anisha Ramakrishna
Family Karma
Friendship
Bravo Relationships
Related

Family Karma's Anisha Spills All About Her Fiance