When a viewer called into the Watch What Happens Live After Show with a question about the worst or weirdest Valentine's Day story Josh Duhamel or Julianne Hough had, nobody expected the turn that things were about to take.

Duhamel slowly started to tell his tale, creeping around his choice of words at a snail's pace. "I dressed up like," he started, taking a bit of a turn, and continuing: "Did you ever see Pulp Fiction? You know the gimp at the end of the movie? ... And that's where I'll leave it."

Andy Cohen couldn't resist a follow-up, asking if he got into full Pulp gimp costume and if it was supposed to be "a sexy time thing," to which Josh finally caved. 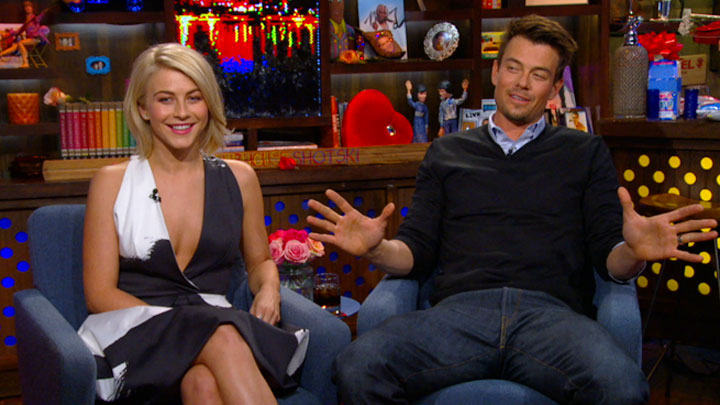 "It was supposed to be a romantic gesture," he admitted. "Turned out to be awkward and just bizarre, mostly." It was then that his Safe Haven co-star Julianne showed off some impeccable comedic timing, saying "I enjoyed it."

Another highlight of the After Show? Josh detailing his warning to any lady lucky enough to be involved in a love scene with him. "The first thing I say before I ever start any love scene is 'If something happens down there, I'm sorry, and if something doesn't happen down there, i'm sorry.' And I've been a victim of both," he said.
All Posts About
Andy Cohen
Watch What Happens Live with Andy Cohen
Josh Duhamel
Julianne Hough
Related Show