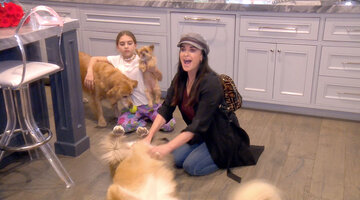 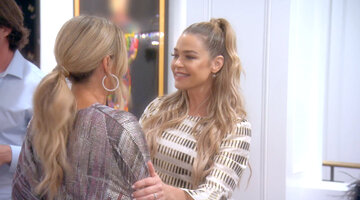 0:58
Preview
Denise Richards Is Having a Hard Time Recovering From Surgery 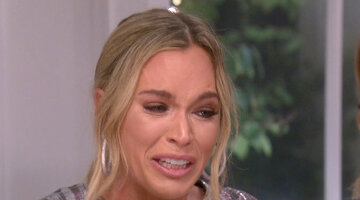 As the saying goes, "You never get a second chance to make a first impression." But let's hope that Teddi Mellencamp Arroyave and Sutton Stracke are able to have a do-over after the latest episode of The Real Housewives of Beverly Hills.

After a tense dinner the night before, Teddi and Sutton weren't really feeling each other when they arrived at Kyle Richards' dinner party in the April 29 episode. Things went from bad to worse when Lisa Rinna suggested they all go around and reveal their first impression of the Housewife sitting to their left.

Teddi shared during her appearance on Watch What Happens Live with Andy Cohen: @ Home on April 29 that she had a feeling Sutton wasn't going to be so complimentary given the existing iciness between them. "The second I saw Sutton sit down next to me, I was like, OK, now everybody's gonna be like, 'Yaaaas, queen! You're the best human ever!'" she recalled in the below clip. "And then it's gonna come to me, and it's gonna be not good."

Teddi's prediction turned out to be true. "I thought that Teddi, maybe you were gonna be a little boring," Sutton said of Teddi during the dinner party. "That was my first impression. And then pregnant, God help us. But you're way more interesting than I thought. I didn't know the depth of who you were."

Things started to get heated between the two when Teddi questioned Sutton about her comments, as well as what she said about her upcoming ALL IN retreat the night before. Teddi then broke down into tears and excused herself from the table for a moment.

During an interview with The Daily Dish earlier this month, Teddi said that her drama with Sutton, which was teased in the RHOBH Season 10 trailer, "really hurt my feelings." "It didn’t start us on the best foot," she said.

She explained on WWHL: @ Home that what really made her upset about Sutton's comments is when she called out her pregnancy. Teddi has been open about conceiving daughter Slate, 7, and son Cruz, 5, via IVF, and she was expecting her third child, daughter Dove, at the time. Dove, who was born on February 25, was conceived naturally.

"The part that really set me over the edge was when she was like, 'And pregnant. Ugh,'" Teddi said on WWHL: @ Home. "Knowing how vocal I've been about my infertility issues and struggles, I was like, 'You know what? I'm done.'"

Teddi shared a similar sentiment on Twitter. "'And then pregnant God help us…' is what got to me," she tweeted. "I’ve been very open about my fertility struggles. So for somebody to come in with her ready to wear and put negativity on it really upset me."

“And then pregnant God help us…” is what got to me. I’ve been very open about my fertility struggles. So for somebody to come in with her ready to wear and put negativity on it really upset me. #RHOBH

She also joked on Twitter, "If I broke down and cried every time I was called boring, Dove would need to swaddle ME five times a day."

If I broke down and cried every time I was called boring, Dove would need to swaddle ME five times a day. #RHOBH

Kyle came to Teddi's defense on WWHL: @ Home, saying that she doesn't believe her friend overreacted to Sutton's comments. "No. First of all, I'm a very emotional person. Teddi is very similar to me, but she's also pregnant at the time," she said, adding that she thought what Sutton said was "inappropriate" in the below clip. "Maybe over-the-top, but hey, you know, you're pregnant and emotional. I totally got it."

Will John Mellencamp Make an Appearance on RHOBH?

Both Kyle and Teddi's husband, Edwin Arroyave, comforted her during the dinner party. Teddi told fans in her recent Instagram Story that she's glad that Edwin generally doesn't get involved in the RHOBH drama. "I am super grateful that Edwin doesn't chime in," Teddi said of the night at Kyle's house. "I don't like when men chime in on a conversation happening amongst us crazy ladies."

However, Teddi said she wishes Edwin paid a little more attention to her and less on his salad. "I mean, really, Edwin?" Teddi joked in her Instagram Story, telling her husband in another video as he watched the clip back, "Like you really needed to get that last frickin' bite? I'm having a breakdown."

Edwin later clarified his preoccupation with his salad in his recent Instagram Story. "So here's the thing Teddi: I went in for the bite because I started to panic. I'd never seen you cry on the show in front of me," he said. "So hopefully I would go in for a bite, and hopefully by the time I was done with the bite, it would be over. But it was just getting started."

Teddi and Sutton have been in touch since this unforgettable dinner party. Teddi said that she has even given the 90210 newbie some advice on her first season of RHOBH. "Yeah, we talk a little bit over DM. I think we both knew that this episode would be hard for us to watch back," Teddi said in her Instagram Story. "And I just said to her, 'You've got to laugh at yourself. If not, you'll make yourself crazy.' I think that's the truth."

Dorit Kemsley to Kyle Richards: "I Have a F---ing Life!"
Life is better as an Insider
Bravo Insider is your VIP pass to never-before-seen content, exclusive giveaways, and so much more!
Sign Up for Free
All Posts About
Kyle Richards
Lisa Rinna
Sutton Stracke
Teddi Mellencamp Arroyave
The Real Housewives of Beverly Hills
Friendship
Edwin Arroyave
Related

That Was the Less Sassy Version of Teddi's Text Invite