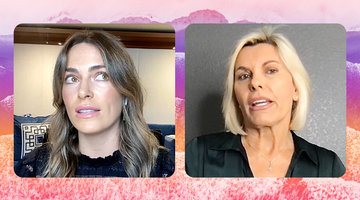 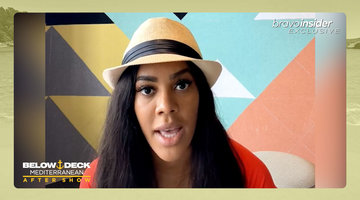 5:13
S6 - E8 | Part 2
Was Lexi Wilson Pulling Her Weight During Charter? Lexi and the Crew Speak Out 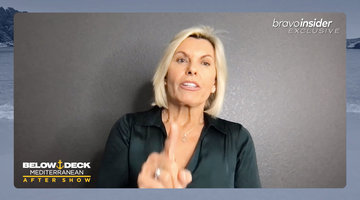 The pressure was on for Mathew Shea in the September 27 episode of Below Deck Mediterranean. It was the first time Captain Sandy Yawn would be dining with the charter guests this season, so the chef's dinner had to especially be on point.

Luckily, Mat delivered, impressing the charter guests and Captain Sandy alike with his Italian feast. However, there was one misstep on the part of the chef that Captain Sandy pointed out to Mat after the meal. "Mathew, the dinner was excellent. One thing: My plate had a lot of dark fish. I don't think you should ever serve that," Captain Sandy said. "I don't like that. My plate was full of it."

Captain Sandy later explained on Twitter why serving dark fish meat is such a big deal. "The bloodline [a dark, blood-rich muscle that runs through the center of some types of fish] can cause fish meat to be dark, fishy [and] stronger in flavor. Some people prefer the meat to be white, as it tastes better [and] fresher!" she tweeted. "It's all part of quality control [and] giving guests the best dining experience!"

#IYKYK The bloodline can cause fish meat to be dark, fishy & stronger in flavor. Some people prefer the meat to be white, as it tastes better & fresher! It's all part of quality control & giving guests the best dining experience! #BelowDeckMed 🛳⚓💙https://t.co/ejSbkdk33K

She added in another tweet, "Bloodline can make it bitter, strong, and too fishy. That's why you don't serve dark fish meat. Chefs should know better."

Captain Sandy also explained in the Below Deck Mediterranean After Show why she thought it was important to give Mat this feedback. "If I see something, I'm gonna bring it to his attention," she said in the Bravo Insider exclusive, above. "Because how will he know if you don't?"

Heading into that dinner, Mat said that he was mostly concerned with impressing the charter guests, even with the added stress of Captain Sandy at the table. "Yeah, the captain's opinions matter," he said in the Below Deck Med After Show. "But you know, if the charter guest is happy, that's like, that's what we're there for."

So, what did Mat really think of Captain Sandy's critique of his food? The chef reveals how he feels about Captain Sandy's comments today, and the interior team also weighs in on this major meal in the Below Deck Med After Show, above. For instant access, as well as more exclusive content featuring your favorite Bravolebs, sign up to be a Bravo Insider.

Want more Below Deck Med? Season 6 airs Mondays at 9/8c on Bravo with early access to new episodes on Peacock.

Life is better as an Insider
Bravo Insider is your VIP pass to never-before-seen content, exclusive giveaways, and so much more!
Sign Up for Free
All Posts About
Mathew Shea
Sandy Yawn
Below Deck Mediterranean
Bravo Insider
Related

What Captain Sandy Does While the Crew Is Out