Sign Up for Free to View
Khloe Kardashian’s Third Plead the Fifth!

Paging Kris Jenner: We've just come up with another brilliant monetization idea for Khloe Kardashian. The famously organized Kardashian sister — who coined the term "Khlo-CD" to describe her particular attention to detail — could charge admission to view her pantry and gawk at the thing of beauty.

To recap, Khloe already had one of the most incredibly enviable and organized pantries in the world — no disrespect to Heather Dubrow, who also slays the game. But somehow she just took the whole thing even more over the top. (Impressive, we didn't see how that was even possible.)

"I have always known that I'm very particular in the way that I like things done," Khloe wrote on her Instagram Stories. "I'm incredibly organized and I love/need everything to be labeled and color-coded. I normally do not project my crazy particular, someway controlling ways onto other people. But I think I've met my soul mate in @thehomeedit." 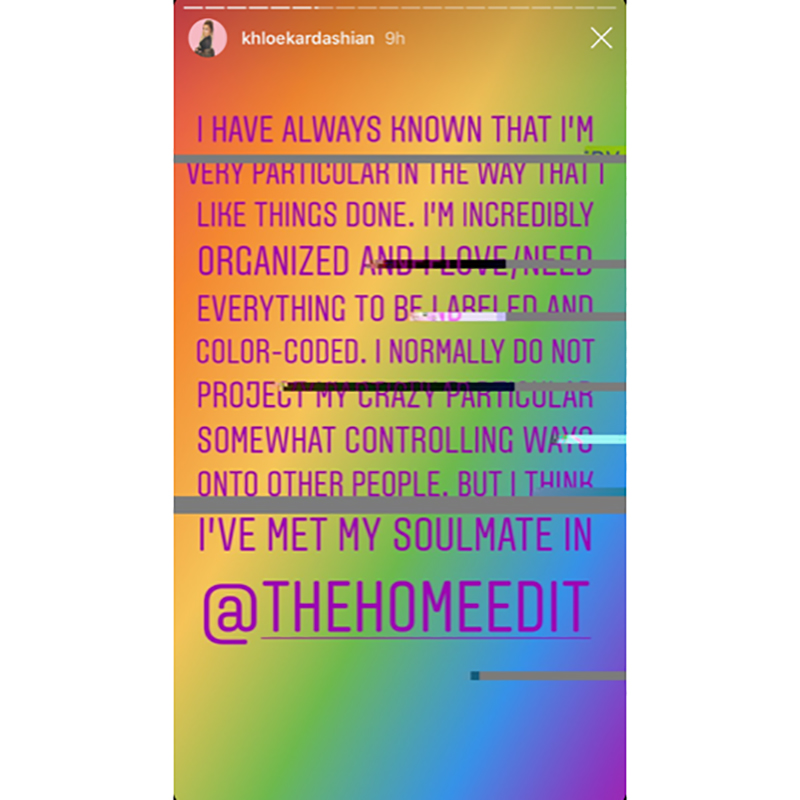 Next up, she showed the results of her collab with The Home Edit, which took the pantry from another planet and turned it into... the pantry from another, even further-out planet? The main change was labeling everything, which Khloe described as a dose of "jooooge" (though the official dictionary spelling is more like "zhuzh" — and you're welcome for that).

Busy Philipps: Pantry Organizing Project "Changed My Life" (And the Pic Might Change Yours, Too)

And she said the whole thing just upped her "happiness meter." And wouldn't it do the same for yours? Behold:

While Khloe's "before" shot is the pantry of most people's wildest fantasies — we present the side-by-side before-and-after shots for good measure:

Jealous much? (So are we. Just make sure you create a label for that emotion and file it under "J" alphabetically, right between the Indian black salt and the ketchup.)

Life is better as an Insider
Bravo Insider is your VIP pass to never-before-seen content, exclusive giveaways, and so much more!
Sign Up for Free
All Posts About
Food & Drinks
Food
Home
Khloe Kardashian
Related

Get a New Look Inside Katie’s Beautiful Apartment

You’ve Got to See Amelia Hamlin Rocking a Mustache