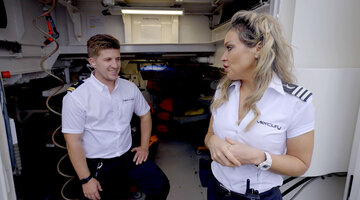 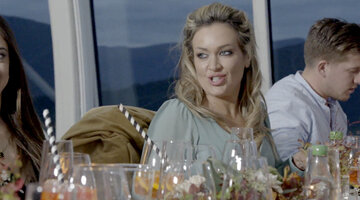 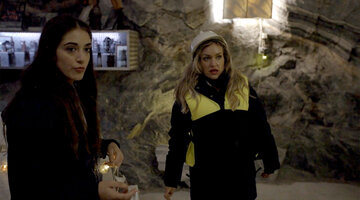 Oriana Schneps and Lewis Lupton can be seen getting rather steamy aboard superyacht Mercury in Below Deck Adventure's Season 1 trailer, but did the romance ever make it to dry land?

According to Oriana, no — but she has zero regrets. "When you're working in close quarters with anyone on a boat, you just start to spend more time with them, and over time, you kind of develop a friendship or romance or whatever it may be," the stew told The Daily Dish. "Coming aboard, he wasn't someone who initially caught my eye, but when I got to know him a bit more, it progressed a bit."

As for where she and the bosun stand today, Oriana revealed they've stayed friends. "He's awesome. I saw him the other month when we were both out in L.A.," she added. "We keep in contact. He's a great guy and I'm really happy to have him in my life."

Lewis isn't the only man in Oriana's life, though. In fact, she told The Daily Dish that her current boyfriend John was once a charter guest of hers. "We actually never really interacted much on the boat, but Faye [Clarke] and I, after the season — her and I became really close throughout — we decided to take a trip to Croatia together."

John just so happened to be there as well. "And that's kind of when I started to get to know him," Oriana said. "We were friends at that time, and then over the course of the next couple months, we would just keep in touch. And then we saw each other a couple more times and then a few months later, we decided to go beyond friends."

The rest was history — as is the drama that played out between Oriana and Faye on Below Deck Adventure's latest episode. As fans may recall, Faye was not happy to hear that Oriana had asked Lewis to order her uniform epaulets that would indicate she was second stew.

Oriana, however, genuinely thought that was the case. "It was kind of always clear to me since joining the boat that this was my position as second [stew]," Oriana said. "Like, I never would've signed up on a boat to have an ambiguous position or, you know, a junior position, just given my experience."

Oriana added that she never intended to cause trouble with Faye — something she's "hopeful that viewers will be able to see" as the season progresses, as well as how the entire interior team comes together to "crush it in the end."

Watch Below Deck Adventure on Bravo Tuesdays at 9/8c and next day on Peacock. Catch up on the Bravo app.

Life is better as an Insider
Bravo Insider is your VIP pass to never-before-seen content, exclusive giveaways, and so much more!
Sign Up for Free
All Posts About
Faye Clarke
Lewis Lupton
Oriana Schneps
Below Deck Adventure
Exclusive
Related

Faye Clarke Teases What’s to Come on Below Deck Adventure

Kerry Titheradge Is at the Helm for Below Deck Adventure