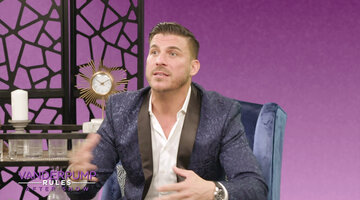 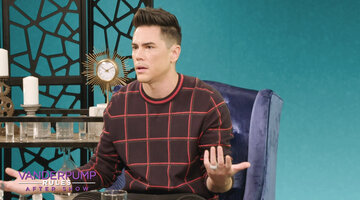 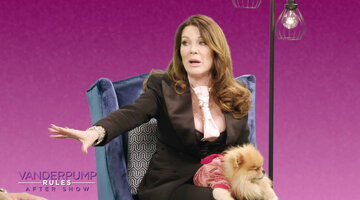 Just because Scheana Shay didn't bring a date to Jax Taylor and Brittany Cartwright's wedding in June 2019 doesn't mean she wasn't feeling the love that day. At the after party for the couple's big day, Scheana ended up locking lips with a rather tall mystery man, as we saw earlier this season of Vanderpump Rules.

Scheana even remarked in an interview during the episode that Kristen Doute was really missing out while hanging around her ex-boyfriend Brian Carter at the nuptials. "Being a bridesmaid is the best. I mean, you're first on the guest list, you get dressed up, get to look super hot, make out with single groomsmen. I'm doing everything Kristen should be doing, but instead she's out chasing Carter through the darkness of the castle," Scheana said. "Oh, well. I get the tall one."

So, who was this tall, dark, and handsome gentleman Scheana had the pleasure of smooching at Jax and Brittany's wedding? The Vanderpump Rules crew shed some light on the situation during the After Show for Watch What Happens Live with Andy Cohen: @ Home on March 31.

Brittany identified the mystery man as one of Jax's groomsmen, who also just so happened to serve as a groomsmen in Tom Schwartz and Katie Maloney-Schwartz's wedding in 2016. "That was a huge deal," Jax said of his groomsman's makeout sesh with Scheana. "He was so petrified about that, oh my god."

After Show: Jax Taylor Gets Educated About Birthday Gifts

Jax and Tom also called their mutual groomsman "an amazing guy" and "such a good human being," respectively. "He's such a good guy," Tom said during the WWHL: @ Home After Show. "He just was really drunk. Yeah, he felt terrible about that."

Get more behind-the-scenes scoop on Jax and Brittany's wedding in the Vanderpump Rules Season 8 After Show, above.

There's more wedding drama to come this season of Vanderpump Rules. See what we mean, below.

Why Jax & Brittany Said Shep Was Their Worst Wedding Guest

Jax and Brittany's Wedding Had "Fights" and "Hookups"